A few weeks ago, I found myself in uncharted territory as a 1st time Horse Show Wife.

My husband Andy and his lease horse went to their first HJ show EVAR and I found myself in the role of groom, photographer/videographer, and holder of things. But first, some background on Andy and his pony….

As some of you might have caught in Horse Expo/Megan and L visit post,  Andy is leasing a horse named Upgreydd.

2 D’s for a Double Dose of Pimpin

Upgreydd, which is pronounced just like “Upgrade” is a grey 2006 TB (barn name Fallon) that’s missing the “OT” in OTTB because he wouldn’t leave the starting gate. Fallon is a bit of a stubborn horse but is honest, pretty unflappable, and likes to jump. He and Andy are a really good match both in temperament and size so I’m glad it has worked out!

Andy picked up riding a bit after we started dating and with a long history of almost pro level mountain biking under his belt, riding came pretty natural to him so he kept taking lessons and started to lease. He became pretty intrigued with Eventing so he started riding with Nicole’s trainer, who then introduced us to Fallon.

Anyways, back to my story of being Horse Show Wife…

We’re lucky to have several very close shows that the local HJ association puts on, so Andy was excited when Trainer said she would be taking several horses and had room for Fallon. That night before the show,  we cleaned and conditioned his tack (I’m slightly neurotic about clean tack) and boots and then I picked out his outfit for the show because I gotta make sure my man looks fly AF.

Andy planned on doing the X-rails, 2 ft, and maybe the 2’3 class if the first 2  went well and since those were scheduled to start at 8:30 we were at the show grounds pretty early. While Andy was dealing with registration, I went ahead and started to groom and tacked up Fallon so he would be ready to roll. Before we made our way to the warm up ring I made sure I had snacks, water, sunblock, treats for Fallon, fly spray, and the camera on hand so I would be prepared for anything! Now I realize why those groom backpacks are so useful! I might have to get one for us to use for shows. 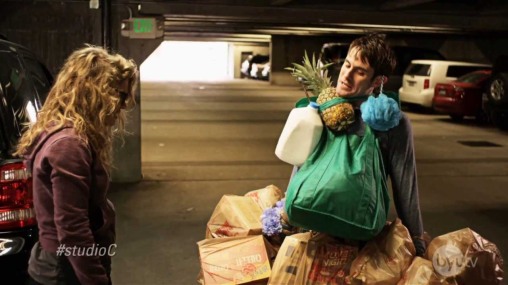 This was pretty much me

I took a ton of pictures while Andy and his fellow barnmates warmed up so I could practice taking good action shots for the actual round. Here are some of my attempts above.

The 1st class up with the X-rail class which had about 7-8 people including Andy, who went in the middle of the pack, so we were able to watch a few people go first. Quite a few of the horses were being spooky with the fillers and flowers so it made for quite an exciting x-rail class. I don’t know if Andy was nervous, but damn I was a bit anxious when he went in for his ride, but he was cool as a cucumber and had a nice clean round! So clean and so close to the optimum time that he took 1st place!! I started laughing hysterically as I was so proud and impressed! #proudhorseshowwife

But somehow,  between the x-rail and 2ft class I managed to lose Andy’s ribbon and horse cookie prize #fail. I had put it in the bed of a golf cart and when I went back to get it the golf cart was gone. I managed to track down the golf cart and retrieved the prize , but the ribbon must have blown out. Andy was peeved and laughed  at me when I told him what happened, but I managed to get a replacement ribbon for him. Thanks Show Managers!

His 2ft class was bigger with about 12 people and also included a jump off course if you jumped the round clean. He had a clean round and a clean jump off, and was leading the pack until a firecracker of a pony came in and smoked him and took about 6 seconds off his time. In the end though,. Andy and Fallon ended up taking 2nd overall!

Since the first 2 classes went so well, he decided to do the 2’3 class at the last minute so there was a bit of downtime  since he was towards the end of a pretty big class.  I gave Andy some gatorade, shoved him a granola bar, and had him hang out in the shade while I walked Fallon around to get some water. We were glad to see Fallon suck down water because it was a pretty warm day and he was glad to get a break at the trailer with his hay net. After a quick break, Andy was back out again and I remember that I should get some video! Here’s his 2’3 class and jump off for your viewing pleasure!

A solid clean round ended up as a 6th place for Andy and Fallon out of a decently sized class. He was super pleased with how his first show went and now has caught the “show bug” as he was already thinking about the next show! Ha!

I’m really super proud of how he did as was so glad I got to be there to help and see him and Fallon go around. Being the help/horse show spouse this time around also made me appreciate that much more how Andy helps me at my shows and clinics, and I’m glad I was able to return the favor. Great job, Andy and Fallon! You both dolled out a double dose of pimpin!

Do any of your significant others show? Or compete in events where you’ve been their helper and vice versa? Would love to hear your stories too! 🙂

This entry was posted in Uncategorized. Bookmark the permalink.